Other Companies Do Software.
We Do Support.™ One Partner, Built for Scale

A comprehensive service model to optimize IT Investments Don’t be forced into a costly ERP system upgrade or patch a system that is performing well just to stay fully supported or in response to vendor pressure. Extend the life and drive more value out of current ERP and database software. Save 50% on annual support fees and up to 90% on total support costs by switching from vendor support. Rimini Street helps clients reduce costs, enabling them to focus resources on innovation and strategic initiatives. With many IaaS and SaaS cloud options to choose from, it is critical to pick a cloud strategy that supports business needs first. Rimini Street offers vendor-agnostic planning and advice to help avoid the risk of lock-in to proprietary cloud models and maximize business value. Annual maintenance fees are only the tip of the iceberg when considering the total cost of supporting ERP systems. Rimini Street enables clients to save up to 90% on total software support costs and redirect those savings and resources to strategic, business-driven initiatives. Avoid getting stuck on a vendor-dictated roadmap that doesn’t align with business strategy. Based on the experience of thousands of other clients, Rimini Street offers independent application and roadmap guidance so clients can modernize and optimize ERP systems on a Business-Driven Roadmap, not the vendor’s.

Rimini Street knows that enterprise applications, like those offered by Oracle, SAP and Salesforce, are at the core of business processes. That is why all clients are assigned a Primary Support Engineer (PSE), an expert engineer with an average of 15 years of experience, to meet client needs. Client success is Rimini Street’s success, and it starts by delivering the best third-party enterprise support services in the industry.

What Our Clients are Doing “When we make a call to Rimini Support, someone we know answers the phone and starts dealing with the problem immediately.” “We moved to Rimini Street because the risks were low and we knew the financial savings would be a huge benefit. After we experienced far better support than what we had before, our decision was validated, and we’ve since significantly expanded our global footprint through Rimini Street support .” “When we signed up with Rimini Street, the first and biggest change was that it felt like a partnership. Second, the amount of information and analysis work that is done by the Rimini Street team helps us make better decisions. We get specific answers and directions as to what we can do to solve issues.” “The switch to Rimini Street was a tremendous advantage for us, especially reducing our IT costs, and I am glad we made that decision as quickly as we did. This is the first time I have worked with a supplier where all the employees are fully committed to enabling our business to grow with the same level of enthusiasm as our job sites. I am very impressed with the Rimini Street support engineers. I look forward to a long working relationship.”

“Rimini Street is a company that has the know-how and experience in support services for comprehensive enterprise solutions, and with Rimini Street support, Seoul Semiconductor can now maintain its current ERP system independent of SAP’s maintenance and support schedule – as well as resolve problems as soon as they happen. This has been quite an innovative change.”

“The response received from Rimini Street is fantastic -- my team members do not even have time to go and make a cup of coffee, that is how fast Rimini Street gets back to their customers.”

“Because we’ve had, and continue to have, such a positive support experience through Rimini Street for our PeopleSoft HCM software, the decision to add Oracle EBS support was much easier.” 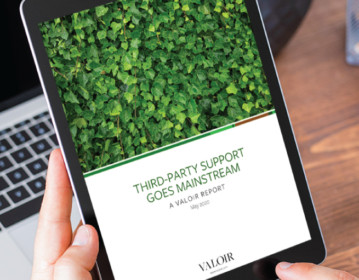 Adoption of third-party support for enterprise software is now mainstream. Independent research firm Valoir analyzed its growing acceptance, finding that demand is widespread — from cost-cutters to innovators to a variety of companies in-between. Even ERP vendors reluctantly acknowledge its utility as they focus efforts on the cloud. Independent, third-party support has evolved into a strategic portfolio management tool for enterprise applications, gaining broader strategic acceptance from its origins as a cost containment tactic. Valoir found that its versatility facilitates: Innovation around the edges of a mature, highly functional ERP system Maximizing value from existing investments Taking a measured approach to cloud evolution Digital transformation Tactically, independent, third-party software support helps CIOs save resources and keep IT teams engaged with new initiatives rather than routine support. Strategically, it helps CIOs meet business objectives, demonstrate value, and move to a Business-Driven Roadmap from one dictated by an ERP vendor. In analyzing third-party enterprise software support providers, Valoir specifically recognized Rimini Street for its: Breadth of knowledge and depth of support, featuring a Primary Support Engineer model Pure focus on independent, third-party support versus other IT or consulting services Track record of strong client relationships Value, service, price Getting started is simple.